I love the movie “Wayne’s World” and laugh every time I watch it. One of the highlights of the movie is watching Wayne and Garth get down on their knees in homage to Alice Cooper. The lines “We are not Worthy” have been repeated many times since then by people who have found themselves in the presence of greatness.

I found myself thinking that I was not worthy after watching Joanna Connor perform at the “House of Blues” for the second time in the last 3 months. I thought about getting down on my knees, but decided that I’d be too embarrassed to ask someone to help me get up off the floor.

Next to Carlos Santana, Joanna Connor is the greatest living guitarist that I have ever seen perform. She is the female version of Stevie Ray Vaughn. My favorite songs that she performed during her two appearances were “Magic Sam’s” Boogie, with a few bars that sounded a lot like ZZ Top’s classic “Tush”, and an acoustic remake of Jimi Hendrix’s “Little Wing”.

I was surprised to find out that Joanna had released 10 albums. Here are my thoughts about her 2016 release, “Six String Stories”. 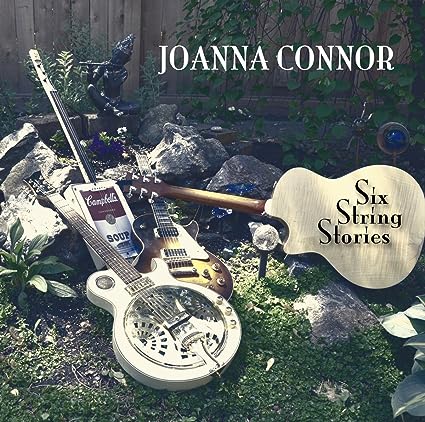 Track 1-The album goes from zero to sixty with the upbeat bluesy song “It’s a Woman Way”. Joanna’s playing is extraordinary, and her vocals force you to take notice. Move over men. Let a woman show you how it’s done!

Track 2-“By Your Side” starts off with some ear piercing feedback and then jumps into a “Who Do You Love” sounding intro. The song portrays a woman trying to convince a man that she is everything that he could possibly want. The guitar riffs are simply amazing. The only negative is that the song ends rather abruptly.

Track 3-“We Stayed Together” is a slower paced song that depicts the story of a couple that despite sleepless nights, arguments, and constant fights, have managed to keep their marriage together. I love how Joanna bends her strings to enunciate the feeling of pain.

Track 4-“Golden” has a jazzy feel. I love the crisp and gentle sound of the cymbals at the beginning of the song. Joanna proves that she is equally adept at creating precise sounds from a jazz guitar as she is with a blues guitar. I also appreciate Joanna incorporating elements of Stevie Wonder’s “Living for the City” into the song. She even breaks into a stripped down rap with a funky beat in the background.

Track 5-“Swamp Swim”-starts with a slow drum beat with some tight bass licks added to darken the mood. Throw in some maracas and some great harmonica solos, and you have a mesmerizing piece of music that puts you right in the middle of the Bayou. I could picture snakes slithering in the grass, and gators attacking unsuspecting animals at a lake’s shoreline. It reminds me of something you would have heard on the HBO series “True Blood”.

Track 6-Love Coming On Strong-punches you in the face with a fat slap of the drum and the squealing sound of Joanna’s guitar. I enjoyed the gritty male vocals that mixed in with Joanna’s own angry tone.

Track 7-Heaven (featuring the Lewis Family Singers)-incorporates many different musical styles. The exciting Conga drum intro transitions into a song that Paul Simon could have written. It reminds me of something that you might have heard on his album “Graceland”. Think of “You Can Call Me Al”. It then adds a little Jazz flare with some great alternating trumpet, and guitar solos. The song then transforms into a Gospel powerhouse with a stern sermon backed by a great Gospel Choir bringing the close to a dramatic end.

Track 8-Halsted Street-Is a fun instrumental. It once again highlights Joanna’s chops. The song starts off with a slow repetitive guitar track which gets pushed to a frenetic pace by the Zeppelinesque drum beats in the background. For guitar lovers everywhere.

Track 9-Sky is Crying-is a live version of the classic Elmore James song. The recording is phenomenal. There is a great sense of dimension and dynamics to the song. Joanna’s playing is inspired.

Track 10-Young Woman Blues-The album closes with a slow almost ballad like song. While Joanna’s playing is once again impressive, the real star of this song is Joanna’s longtime bandmate Marion Lance Lewis. His Bass leads the way throughout the song. 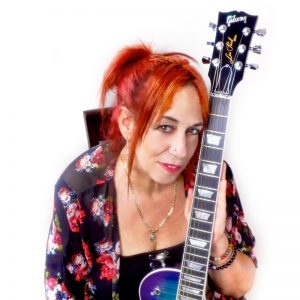 Joanna Connor has been swimming under the radar for way too long. Go out and buy this album. Better yet, if you ever get to Chicago, go see her live. She is a regular at the “House of Blues”, and “Kingston Mines”.

Joanna was nice enough to allow me to interview her as a follow up to her live performance. Continue reading below. 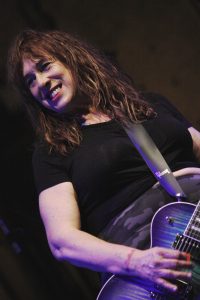 1. What or who inspired you to start playing music?

I remember loving music from the time I was a toddler. I tried to sing like Louis Armstrong, and I was two then .

2. What is the first song you learned how to play, and what was your practice instrument?

3. What is your proudest moment as a musician?

The first time Buddy Guy acknowledged me in public on stage. I had just moved to Chicago. I was 22.

I listen to a variety of music. Right now I’m on an Irish traditional music binge.

5. What kind of audio system are you using to listen to music?

Lol! I have none! I listen on my phone with headphones!

6. Do you prefer the sound of Analog (Vinyl) or Digital (CD)?

I am old, so I love analog.

7. What do you like to do outside of music that contributes to your musicality, or that rejuvenates your creativity?

I am a big reader. I also love nature. I gig A LOT so I sleep when I can to recharge.

8.What is your ultimate goal as an artist?

To be an accomplished and fluid guitarist

9. What challenges have you faced that have prevented you from reaching this goal?

I’m still working on it !

10. What are you currently working on?

I’m gigging 4-6 nights per week. Some of my gigs are 5 sets long. I’m working on survival! Haha

11. How do you go about writing a song? What is your creative process?

I’m a collaborative person lately. I write with my bassist. But I hear grooves in my head often 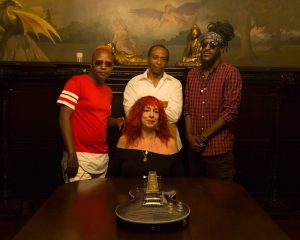 12. How long have you been playing with your current band, and what are their names and the instruments that they play?

I’ve had my own band since 1988. My current line up has been together 4 years- Anthony Palmer – guitar, James Carter- drums, Lance Lewis – bass

13. How did you choose them to join your band?

I’ve known them on the Chicago scene a while.

14. Do you typically work off of a set list when you perform?

I have no set list. Every night is different! Sorry ! I play off the top of my head .

15. What artist(s) would you still love to collaborate with?

16. Who was your favorite artist to work with?

17.You performed several covers at the concert that I attended, what is your favorite cover that you perform, and why?

I love playing Little Wing. I think about my kids when I play it. It’s a beautiful song and lends to expression.

19. If you had to do one thing differently in your career, what would it be?

Get a degree in something practical- just in case. Also, put up with less shit from Industry people