My next album up for review is “Alone Together Forever”, a brand new (summer of 2016) release from “My New Mixtape” a local artist out of Alexandria, VA. 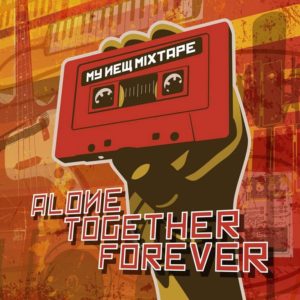 Let me cut to the chase and tell you that I love it. I’ve listened to the album 4 times, and I’ve enjoyed the music more and more with every listen. 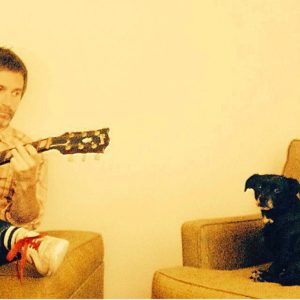 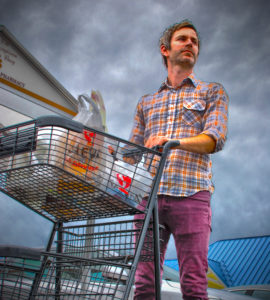 At this point, I would typically try and decipher the meaning behind the lyrics of each song. However, for this review, I was lucky enough to secure an interview with Jarrett. I’ll let him explain the meaning of his songs in his own words.

Take it away, Jarrett-

Generation Pixelated – The album’s opening track begins with the line “I’ve got so much to say…” setting the tone for the album as a whole.  Each of three sections that make up the song refer to different themes and moods that reoccur throughout the record.  The first movement climaxing with the albums title “alone together forever… whatever”.  A combination of concern for our situation as human beings coupled with a touch of slacker defeat.

Talk the Walk – A cautionary tale for the half assed and religiously blinded among us.  Especially poignant for times that require more than thoughts and prayers to fix the problems we face.  The chorus juxtaposes this with the desire to find happiness despite the often maddening world… “i wanna learn to have fun”

January –  One of the songs on the record to reference mortality.  Being numb (referred to by the title) to someone else’s suffering until it’s too late to help them.  Also the peace one hopefully feels when their life of suffering is over.

Sunburn Suburb Someday – written from a pre cell phone perspective “I must have missed you there / i guess you weren’t where you said you’d be”.  And more generally about feeling alone in the crowd.  Another reference to the albums title.

And You And I – A song from the perspective of an old married couple reflecting on their life together and finding peace in the end.  Inspired by the last few pages of the David Brooks Book “The Social Animal”

Namesake Feature – The opening line “I’m gonna write you a song in drop d” is a reference to the tuning of the guitars in the song.  A song about returning to simpler times.  The title is in reference to the fact that we still call cell phones “phones” despite using them for a million other things more often than actually calling someone.  Social media bashing is also a reoccurring theme and is represented here by the lyrics “ I don’t wanna know all about it / where you had lunch / or where you come down on those topics”.

Eight Ball –  A song about being ok with where you are in life despite having had higher or at least very different aspirations.  This song was one of the most fun to write… referencing everything from star wars and zombies to the death rattle of a rock band that never quite hit the big time.

Selfie Stick – This song is written from the point of view of a person who’s lost all patience with the world today.  Not a particularly eloquent assessment of anything…  More akin to a drunken rant by a guy you might meet at a hotel bar at last call.   Another fun one to write and record.

Small Talk – This song features vocals by Dan Miller (Lewis Del Mar).  He is one side of a conversation set to music.  The verse lyrics are transcripts from every bullshit conversation about the weather and sports we all have on a daily basis.  The “greek chorus” style chorus offers a commentary on the issue… “small talk is killing me / it’s killing you  / but still we just can’t stop”.  Another example of a lack of real communication in the world today.

Otherside Tide – This song is in two sections much like the first song on the album.  The first is an assault on tradition and close mindedness while the second half turns inward and personal about the loss of someone close to you and how they are forever with you because of who they helped you become.

For the rest of my interview, please continue reading below:

How did you come up with your name for the band and for the album?

To be fully transparent, My New Mixtape is just me for the most part.  I was in a band for about a decade and we all wrote.  So when I wrote songs that didn’t really fit what we were doing I started a folder in my I-Tunes library called “MyNewMixtape” where I kept the demos.  Those demos turned into the first My New Mixtape release a few years ago.  I realize there is the hip-hop association but I was coming from the “trying to convey your feelings to a girl in middle school” mixtape vibe.

What or who inspired you to start playing music?

Geez..how long do you have….? I love so many kinds of music.  Short list would be The Smiths/The  Beatles/REM/Buddy Holly/James Brown.. I don’t know.. I think the reason I liked the concept of being my own mixtape is that each song could be a whole new band.  even if it was just me.  I think art and music in particular is an area where you can get really weird and random and no one gets hurt.  No one gets offended.. or at least not totally offended.  so why play it safe?

“Well All Right” by Buddy Holly on guitar.  I was into Buddy Holly in the 8th grade which didn’t get me any cool points.  I liked that I could hear the guitar and the chord voicing because they were so prevalent in the mixes.  I learned how to play music by ear alone so I gravitated towards music that explained easily how music worked.  I still love the way the words “all right” sing and have used them in a few of my own songs.

What were the biggest challenges you’ve faced in your musical career?

When I was younger I was in a band that was on a trajectory.. eventually that arc succumbed to gravity.  In hindsight I wouldn’t change a thing but at the time it was pretty devastating.

I’m currently spending time at the post office mailing records to nice people with good taste!  But also writing songs for upcoming releases from My New Mixtape and another band I’m in with my friend Olivia called Astra Via

What is your proudest moment as a musician?

I got to make a record with Mitch Easter.  He produced REM’s Murmur.  I played the bass guitar that was used on that record on our record.   I’m a bit desensitized now but at the time it was such an unbelievable connection to music that had inspired me to become a musician…  #meta

How do you go about writing a song? What is your creative process?

I always equate songs to crossword puzzles…  There’s a theme and it’s totally there waiting for you… you just have to figure it out.  some songs are Monday crosswords that happen in a few minutes and some are Sunday morning marathons…

What do you like to do outside of music that contributes to your musicality, or that rejuvenates your creativity?

I always think of lyrics on dog walks.. or right when i’m about to fall asleep..  the trick is remembering it the next morning.  I like to think the good ones find their way back into your head somehow..

Who do you listen to, and why?

I’ve recently been going through a nineties thing.  I always skip around but I usually avoid nostalgia.  maybe its because the record is done and I can hit the reset button now..  I also like hip hop radio production.  the more ridiculous the better.  it’s a truly confident and unafraid genre right now and that’s inspiring.  My friend Dan Miller (Small Talk – side 2 track 4) is in a band called Lewis Del Mar and they are kicking global ass right now.  very humbled and proud to have him on the record.

What kind of audio system are you currently using?

honestly i’m an aux cable and iPhone jerk currently.  I have a record player and component stereo hifi thing but 90% of the time I’m in my car with my phone checking mixes.

Why did you decide to issue the album on vinyl?

A few reasons.. I have performed on or produced an innumerable quantity of releases but never have I been on vinyl.  #bucketlist but more importantly…Alone Together Forever IS an album.  AND a mixtape.  Despite the genre differences from song to song, the theme of the album remains constant.  I also wanted to contribute something tangible to the world again.  A reminder to slow down and revalue things.  I’m not interested in going backwards but I do feel like everyone needs a crazy grandfather figure that occasionally says something shockingly relevant and obvious in their lives…

I would have preferred that the album came in an antistatic sleeve instead of its black cardboard sleeve. I was disappointed that I still heard a few ticks and pops even after using my Audiodesk System Vinyl Cleaner. But this is just (nit picking!) This release has taught me that the expression “Don’t judge a book by its cover” also applies to record albums. The album was mailed to me in a cardboard box with my address hand written in magic marker. After glancing at the album artwork*, I thought I’d be reviewing a new Rap/Hip Hop album. Wow, was I wrong. “Alone Together Forever” happens to be one of the best pop albums that I’ve heard this year. The music, presents an expansive wall of sound reminiscent of Phil Spector’s recordings from the late 60s. The songs are both catchy, and sophisticated. This is pop music at its finest. Go out and buy the album. Who knows, with enough sales, Jarrett might be able to buy a new turntable, and start listening to his new mixes in the comfort of his home instead of his car.

Until next time, Happy Listening-

*The amount of work that went into creating the album cover is also amazing. For a  a detailed explanation of the creative process, go to http://burblebeep.com/mnm-atf