Suit of Lights-nothing lite about their lyrics.

Suit of Lights-nothing lite about their lyrics.

When Brittany Freeman, from Planetary Group, asked me if I wanted to review “Suit of Lights’” newest album “Break Open the Head”, which was released on Monday, June 6, 2016, I said I’d love to.

Who are “Suit of Lights”? After listening to their album, I’d say that they’re another example of an extremely talented group of musicians that has never had that big break.

The band is led by Joe Darone, who in addition to writing all of the songs, also provides (Vocals, Keys & Programming). The rest of the band includes Chris Connors on (Guitars, Bass, Keys & Programming), Billy Carrion on (Bass), and Corey Colmey on (Drums). Jeff Aderman is also given credit for playing the Piano on the last song on the album “The Beginning is Near”. 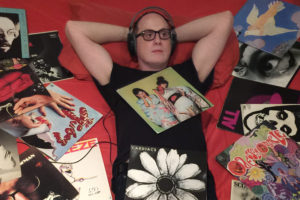 According to “Wikipedia”, “Suit of Lights” has been together since 2004. I can’t believe that they’ve been recording for 12 years and I’m just hearing about them for the first time. What’s wrong with this picture?

I first listened to their album as a MP3 download, and found the recording to be a little compressed. Lucky for me, Brittany was nice enough to send me a copy of the album pressed on 150 gram vinyl. I was also happy to see that the album cover had the lyrics to all of the songs printed on the back cover.

Upon receiving the record, I pulled it out of its paper sleeve and ran it through a “Spin Clean” to remove any of the paper pulp left on the album. I also cleaned it on a “Nitty Gritty 2.5FI-XP”, a “Nitty Gritty 2.5 FI”, and lastly on an “Audiodesk Systeme Vinyl Cleaner”. The sound on the LP was noticeably more dynamic than its MP3 counterpart, with better separation between instruments.

I played the record on a Pro-Ject RPM 5.1 turntable with a Sumiko Blue Point Cartridge  http:///articles/2013-tas-editors-choice-awards-turntables-under-2000/ through a Pioneer Elite SC-09 receiver http://www.soundandvision.com/content/pioneer-elite-sc-09tx-av-receiver#ubHrlJmT3GibxXIk.97, http://hometheaterreview.com/pioneer-elite-sc-09tx-av-receiver-reviewed/?page=2, and a pair of Martin Logan Ascent I speakers http://www.avrev.com/home-theater-loudspeakers/floorstanding-loudspeakers/martinlogan-ascent-and-theater-loudspeakers-2.html.

The opening track “Break Open the Head” jumped out of the speakers. The opening bass line just grabbed my attention. In fact, the strength of Darone’s writing is that his opening hooks are so damn catchy.

I thought “Break Open the Head” was about finding a way to reinvent yourself when you’re at your lowest point. But, after seeing their video http://suitoflights.com/video, I’m not sure that my interpretation is correct. The video seems like an out take from an episode of “The Walking Dead” http://www.thewalkingdead.com/.  What do you think?

A quirky sounding keyboard intro gets you hooked at the beginning of the second track “New Frontier”. The lyrics seem very relevant to our upcoming election. Here are the first few verses: “Where do we stand now? Where do we go from here? Forget your leaders mired in greed and fear. And it’s not that they’re malevolent. It’s just that they’re irrelevant as we stand on the edge of a new frontier.”  I feel like this song could have been written by one of Bernie Sanders’ speech writers.

What’s cool about “New Frontier” is how Darone changes the tempo in the next verse. He slows the song down, and even incorporates the sound of a Carousel when he sings “Going Round and Round and Upside Down on the Carousel-O-Time”.

Track 3 “Higher Self” promotes being the best that you can be. Darone’s vocals are smooth and silky. He doesn’t appear to have incredible range, but his tone is just beautiful.

I couldn’t help but think of the senseless killings over the last few days while listening to the next track “Monsters”. First, “The Voice’s” Christina Grimmie is killed while signing autographs after her concert had ended, http://christinagrimmie.com/ and then 100 people are shot inside a nightclub in Orlando, Florida http://www.cnn.com/2016/06/12/us/orlando-nightclub-shooting/ . The song discusses how we all see monsters at night, but that it is much harder to find the monsters that are right in front of us.

Daron’e lyrics hit it on the head when he says “They don’t have an evil laugh/ Aren’t twirling on a wax mustache/ Not any warnings as they cross your path/ Is it really any wonder/ We’re getting used to seeing monsters around ever corner now?” The song is once again very catchy, but I feel that Darone’s airy vocals are disconnected from the sad picture portrayed by his lyrics.

“Zero Camera”, track 5, begins with a naked piano solo soon accompanied by the drums, keyboards, and some cool sound effects. Darone’s vocals, are supported nicely by the chorus throughout the song.

“Revolution of You”, track 6, opens with the sounds of Arabia. It reminds me of guitar great Al Dimeola’s album “Splendido Hotel” https://en.wikipedia.org/wiki/Splendido_Hotel. The song’s  opening lyrics, “Breaking through, witness the birthing/ of a new order of being/ A new world is not only possible but on her way/ Time now to make a decision/ Utopia or Oblivion” promote a message similar to “Higher Self” in urging people to strive for a higher level of consciousness.

My take on Track 7 “Ritual. Routine. Control.” is that we can only blame ourselves for allowing technology to control our lives. Darone asserts that we run wild as children, but become stuck in our own routines as we are taught how to behave by society. The song reminds me of something that the band “Asia” https://en.wikipedia.org/wiki/Asia_(band) would have put out. Darone’s vocals are once again very strong.

Track 8 “Circling the Drain of History” starts off with a nice bouncy melody which Darone changes beautifully after a brief drum solo. I believe the song questions why we continue to choose war over peace despite our ability to reason. He likens us to “Monkeys with brains all full of mush”.

Track 9 “Reality 2.0” starts off with a punchy intro, laced with guitars and drums. The song changes pace several times. I loved the piano and drums playing together after completing the song for the first time. Darone’s vocals once again shine.  A closer look at the lyrics “We don’t need the chaos and insanity/We don’t need the mad parade/ Or those who profit from the trade/ We don’t need this version of reality/ and I say ‘out with the old’/ Reality 2.0. finds Darone once again searching, this time for a better version of the world we live in.

The album closes with  Track 10 “The Beginning is Near”, which is a beautiful instrumental. It is a very hopeful song. The piano playing is sensitive, and inspiring. I believe that Darone has led me to a better place and that everything in the world will be okay.

In closing, I really enjoyed my first exposure to “Suit of Lights”. I hope you will too.

Let me know what you think.